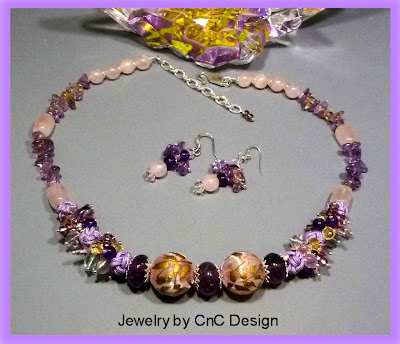 The lilac Cloisonné and fabric knit beads are very light weight and comfortable to wear. They are combined with Amethyst rondells, Rose Quarts beads, Amethyst and Citrine chips, Crystals and Silver accents. This 18 inch necklace with a 2 inch extender is finished with a S-hook clasp. Matcing French Hook earrings complete the set.

Cloisonné is an ancient technique for decorating metalework objects, but in recent centuries using vitreous enamels, and also inlays of cut gemstones, glass, and even linen. and other cloth materials, has become common place, especially in jewelry beads. 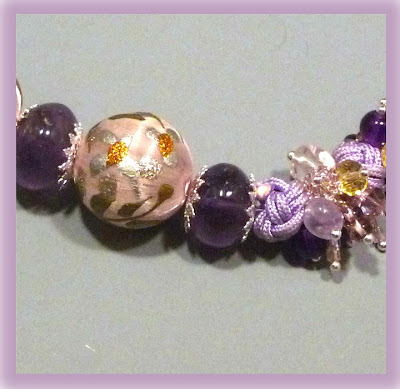 Amethyst is a violet variety of quartz often used in jewelry and decorative statues and lapidary displays. Amethyst is composed of an irregular superposition of alternate lamellae of right-handed and left-handed quartz. It has been shown that this structure may be due to mechanical stresses. Because it has a hardness of seven on the Mohs scale, Amethyst is suitable for use in jewelry. Amethyst occurs in primary hues from a light pinkish violet to a deep purple. Amethyst may exhibit one or both secondary hues, red and blue. Green quartz is sometimes incorrectly called green Amethyst, which is an actual misnomer and not an acceptable name for the material, the proper terminology being Prasiolite.

Citrine is a variety of quartz whose color ranges from a pale yellow to brown. Natural Citrines are rare; most commercial Ctrines are heat-treated Amethyst or Smoky Quartz. It is nearly impossible to tell cut Citrine from yellow Topaz visibly, but they differ in hardness. Citrine has ferric impurities, and is rarely found naturally. Brazil is the leading producer of citrine, with much of its production coming from the state of Rio Grande do Sul. Sometimes Citrine and Amethyst can be found together in the same crystal, which is then referred to as Ametrine. 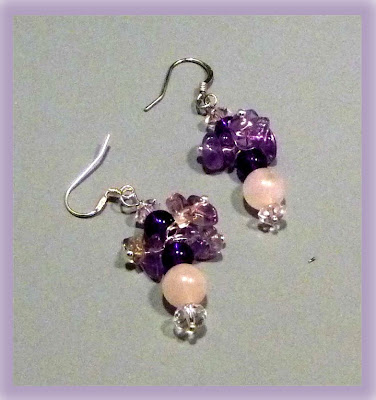 Rose Quartz is a type of Quartz which exhibits a pale pink to dark rose red hue. The color is usually considered as due to trace amounts of titanium, iron, or manganese, in the massive material. Some Rose Quartz contains microscopic rutile needles which produces an asterism in transmitted light. In crystal form (rarely found) it is called Pink Quartz and its color is thought to be caused by trace amounts of phosphate or aluminium. The color in crystals is apparently photosensitive and subject to fading. The first crystals of Rose Quartz were found in a pegmatite dike near Rumford, Maine, USA, but most crystals on the market today come from Minas Gerais, Brazil. Rose Quartz is not popular as a gem because it is generally too clouded by impurities to be suitable for faceting. Rose Quartz is more often carved into figures such as people or animals. Hearts are also commonly found because Rose Quartz is pink and an affordable mineral for Valentines Day.

Cord beads and Crystals are also used in this set.