Gemstones of the Bible !

With the Christmas Season upon us, an interesting topic concerning gemstones is a look at which gemstones are mentioned in the Bible.
.
In the old Testament in Exodus, Chapter 28, we find:
a Sardius, a Topaz, a Carbuncle, an Emerald, a Sapphire, a Diamond, a Ligure, an Agate, an Amethyst, a Beryl, an Onyx, and a Jasper.
.
Then in the New Testament, in Revelations are listed:
a Jasper, a Sapphire, a Chalcedony, an Emerald, a Sardonyx, a Sardius, a Chrysolite, a Beryl, a Topaz, a Chrysoprase, a Jacinth and an Amethyst.
.
In both cases, the number of Gemstones listed is 12. And then within the Gosples we have the 12 gemstones associated with of the Apostles;
Peter: Jasper, Andrew: Garnet, James and John: Emerald, Philip: Carnelian, Bartholomew: Chrysolite, Thomas: Beryl, Matthew: Topaz, James: Sardonyx, Thaddeus: Chrysoprase, Simeon: Jacinth, Matthew: Amethyst, Paul: Sapphire and Judas was one of the original 12 Apostle's, however no gemstone is known to be associated with his name.
.
So if we look closely, in each case the following are named:
A Jasper, a Topaz, an Emerald, a Beryl, an Amethyst, a Sapphire and an Onyx or Sardonyx. We also have the gemstone called a Sardius, which today is referred to as a Carnelian, also the gemstone called Carbuncle, which we know today as a red Garnet, and then the gemstone Jacinth, or as we call it today, the red Zircon. That leaves only the Diamond and Ligure listed in Exodus, but they are replaced with Chrysolite and Chrysoprase in The Gosples and Revelations. Ligure is possibly thought to relate or refer to Amber. And then in Revelations, a new gemstone is named – Chalcedony. So in totality, we have 15 unique gemstones mentioned throughout the Bible, but only 12 are ever listed together in any single reference.
.
.
Posted by --------------- JEWELRY BY CnC ----------------- at 12/09/2008 09:36:00 PM Links to this post

Let's have a fun look at some of the more unusual gems and minerals that can be found in our world!

At the International School of Gemology (ISG) study is done on specimens rather than by pictures from a textbook. This allows the students to learn more about all of the variables that gemstone properties can offer, rather than teaching a simple listing out of a textbook. To do this the ISG has collected as many gems and mineral specimens as can be found, bought, begged, borrowed or get donated.

Occasionally the finds are just so unique that they sort of defy explanation. And with so many students and friends in so many places world wide, the ISG has assembled one of the most unique collections of weird and unusual gems and minerals that you will find anywhere. This particular stone was donated by Trent at BKK Gemstones, Thailand.

This is a piece of Enhydro Quartz.

The fact that quartz crystals often form in hydrothermal intrusions into existing rock makes it no surprise that there are a lot of weird inclusions to be found in most quartz crystals. But few are stranger than finding Light Sweet Crude Oil inside a quartz crystal. But that is exactly what we have below. This is an enhydro quartz crystal that actually contains far more than first meets the eye. Let’s look at just a few of the unusual features in this particular specimen. 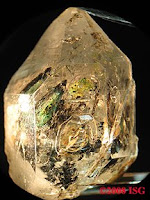 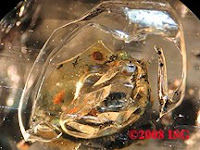 Below you see a formation that has a lot going on with it. Not only do you have a spike looking formation of light and dark petroleum, you also have a lot of twinned crystals. Twinning is when two or more crystals grow in the same dimensional space. In other words, the molecules of the quartz are so tiny and far apart that you can actually have two or more quartz crystals growing within the same place, inside each other. This is what you see below with the many points sticking up to the left of the oil spike. These are simply a whole row of tiny petroleum filled quartz crystals that have all grown inside the larger host crystal. It is actually possible to have scores of crystals growing inside each other due to twinning.

Sometimes these twinned crystals are not full formations, but are sort of ghosts of crystals. What we appropriately call phantoms. A phantom crystal is one that is actually present, but you don’t really see the complete formation because it’s sort of a….well, a phantom. At left you see a phantom crystal that is partially visible due to a cavity that contains water. This water is millions of years old and was inside this phantom crystal when the larger host crystal simply engulfed it during formation. Sort of a "now you see me, now you don’t," looking formation. 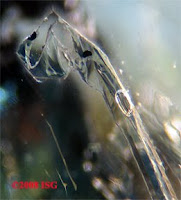 But here is where it really gets fun! Below you see a 10x image of this crystal photographed from one very special direction. You can see the blue and yellow colors of the petroleum filled cavities inside the crystal. But WAIT! 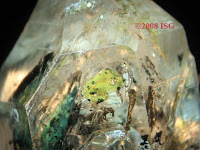 What is that? Is that a FROG? An OILY FROG? It sure looks like it ! 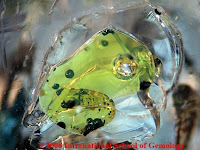 One of the most fun aspects of crystal study is just how weird some of the inclusions can be. And just how many people can see images in the inclusions….sort of like seeing shapes in the clouds in the sky. In imaging what this crystal looks like, this frog jumped out like a……well, a frog! No, no, no. It’s not a real frog. Just a really frog looking petroleum filled cavity.
.
If one gets a chance to go to the Tucson GemFair, these are also the kinds of unique items that sometimes pop out at you as you look through the thousands of rocks, stones, gemstones and minerals that are for sale all over Tucson.
.
Thanks to the ISG for pictures and information on this quartz.
.
.
Posted by --------------- JEWELRY BY CnC ----------------- at 12/02/2008 02:33:00 PM Links to this post

In helping a customer with a problem, I just found out that what I thought was a unique and very rare occurance or possibly a home fix, apparently is somewhat more common place than I would have ever thought. So be careful when taking your jewelry in for repair, especially faceted gemstones in settings with prongs. It has come to my attention that some unscrupulous persons calling themselves 'jewelers' that when they repair jewelry where the stones are loose in their mounting in rings, pendants or earrings are 'super gluing' the stones into the mounts rather than repairing/replacing the prongs or suggesting new settings to their customers.
.
There is no question that good reputable "Jewelers" do not partake in such practices and thus why one should deal with known and well referred "jewelers" when having, especially costly or vintage family heirloom pieces cleaned, repaired or remounted.
.
Depending on which gemstone is mounted in a setting that has been 'super-glued' it is probably removable, but stone condition could be altered considerably. There is probably no question that the mounting will be destroyed in the process. Sometimes if the stones are lightly damaged, repolishing will make the stone usable again. To the naked eye, super-gluing is hard to detect and appears as 'dirt or gunk' on the underside of the gemstone next to the prongs. Under 'UV Light' this 'gunk' will glow slightly bluish if the stone is transparent or clear.
.
This all goes back to the old saying "Know who you are dealing with when value or heritage is involved." I was totally surprised when advised recently that 'super-gluing' is not a unique repair process and is becoming seen more and more often by reputable jewelry repair persons.
.
.
Posted by --------------- JEWELRY BY CnC ----------------- at 12/01/2008 12:01:00 PM Links to this post