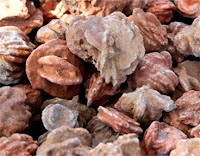 The Red Rose Rock was selected by the Oklahoma Legislature as the Official rock of Oklahoma in 1968. Although not really a gemstone, they are charished by rockhounds and gemologist alike world wide. Oklahoma's Red Rose Rocks are aggregates of Barite Crystals and sand and with an iron content which produces their reddish hue. The Barite crystals form a circular array of flat plates, giving the rock a shape similar to a rose blossom. Rose Rocks appear either as a single rose-like bloom or as clusters of blooms, with sizes ranging from pea sized to over 8 inches inches in diameter.
.
The Red Rose Rocks are most common in and near central Oklahoma and can be found in mineral deposits in the Wichita Mountains and Ouachita Mountains. Red Rose rocks are most common in the Noble area of Cleveland County. Barite Rose Rocks have also been found in California, Mexico, Eqypt and Saudia Arabia, but are not the red color due to the lack of iron. Other varieties of Rose Rocks called Desert Roses, consist of formations of the minerals gypsum and barite with poikilotopic sand inclusions. The 'petals' are crystals flattened on the crystallographic axis, fanning open along the characteristic gypsum cleavage planes. The rosette crystal habit tends to occur when the crystals form in arid sandy conditions, such as the evaporation of a shallow salt basin. Gypsum roses usually have better defined sharper edges than Barite roses. These can be found in the SW United States, Mexico, Saudi Arabia, and the Saraha Desert. Some varities also contain Selenite, thus giving a translucent crystal look rather than a sand look.
.
Oklahoma's Red Rose Rocks were formed during the Permian era, 250 million years ago, when western and central Oklahoma was covered by a shallow sea. As the sea retreated, barite precipitated out of the water and crystallized around grains of quartz sand. This left behind large formation of reddish sandstone, locally called Garber Sandstone, containing deposits of the Red Rose Rocks.
.
.
Posted by --------------- JEWELRY BY CnC ----------------- at 6/23/2009 09:58:00 PM